The Van Staal VR175 is a big spin reel with tremendous power, protection, and spool capacity.

It’s designed for tackling the biggest of fish from the surf, ocean rocks, blue water, and nearshore.

While a potent weapon offshore, the VR175 has plenty of competition.

However, for the surf and ocean rocks, the VR175 stands alone as a super-robust power-house, capable of handling rough stuff for a lifetime of adventure fishing.

There are plenty of spin reels that share the VR’s fishing prowess credentials. The VR’s unique features are its construction materials, construction, and bulletproof design.

In many respects, the VR is a military-grade fishing reel. Strength, capacity and protection, and endurance are in the DNA of the VR.

It’s built to last a lifetime of the toughest big fish battles in the most adverse conditions.

It can be completely submerged in saltwater, sandy slurry, and mud, then battle a hammerhead without the need to be dusted off. And it’s meant to do this session after session.

Maintenance routines require minimal mechanical expertise, furthering its credentials as a no-nonsense reel, that doesn’t require export for the repair of complex and fragile mechanisms.

In many respects, its simplicity defies its space-age appearance and construction.

I certainly cannot attest to the “last a lifetime” claims. But it certainly has all the ingredients to support such assertions.

The VR doesn’t have the smooth drag system and ‘weightless’ crank of its Japanese competitors.

But the core feature of the VR was never about refined performance. The VR is about ‘getting it done’ consistently, predictably, and reliably in the worst of conditions.

And it will continue to do it long after you’ve passed it on to your kids.

Immediately after you turn the handle you will feel a tight crank. The handle and knob, and overall ergonomics of the crank are outstanding, but the tightness will pull focus at first.

Essentially, as it is sealed to within an inch of its life, the main shaft sealing, etc, adds friction to the crank.

The end result is that the crank feels heavier compared to its competitors.

Manufacturers are now going out of their way to deliver a light crank, and the VR bucks this trend. Once you’re used to it, however, the tighter crank is not an issue.

The 175 has 13 bearings. The crank, while heavy, is very smooth and certainly inspires confidence when you’re hooked up big.

The rigid alloy body ensures the gears stay well meshed. All the power of the crank is transferred to the fish.

There’s no slop, twisting. The VR maintains its beautiful symmetry under the toughest of loads.

It’s brilliant on the rocks particularly when it comes to landing fish. Landing big fish from the rocks is as tough as fishing gets, particularly on your kit. 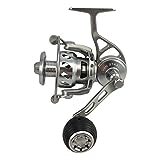 The drag system, while sealed, robust, and strong is not smooth. It is quite well illustrated in this video below in a battle against a feisty tuna. This is the only truly disappointing aspect of the reel.

It can be mitigated by backing off the drag. This will likely extend the fight but will give the fish less opportunity to throw hooks.

In my experience I’m not aware of it causing a problem, however, the feel is a little disconcerting.

You might want to experiment a little to work out how you’ll refine your settings. You may find the jerky drag is not an issue.

The VR comes with the bail arm intact but has a bailess conversion kit included.

Fishing bailess is a pretty significant technique adjustment. In all honesty, it’s not something that has really taken off.

Having said that, those who fish this style, particularly surf anglers, swear by it, and will never go back to a bail arm.

The technique thing is only part of the bailess story. The bail arm is generally the weakest part of a fishing reel.

Being able to fish a spin reel without one delivers an extra level of protection against impact damage.

While I’ve never damaged a bail arm in a fight, I’ve destroyed a few in transit. Particularly as I scale rocks to reach my favorite fishing spots.

I’d keep the bail arm on the VR. The bail arm itself is particularly strong. In fact, it’s one of the strongest there is.

Ultimately, it’s nice to have the option.

You can feel the power of the 4.8 ratio. The loss of speed will make ripping metal slugs exhausting, but you can still achieve speed – the handles are made for cranking.

It’s great for big stickbaits and poppers. If you’re hooked into a bluefin, you’ll be pleased with the cranking power.

The all-alloy construction provides strength and incredible rigidity. Every turn of the handle delivers all the power to the battle, there’s nothing lost in twist or gear slippage.

40 pounds of drag is plenty for turning massive fish. There’s an efficiency about the VR that works in concert with its strength, allowing you to subdue a fish faster.

The VR175 is an excellent option for those who like to cast big live baits long distances. It’s built for casting heavyweights.

The VR175 is for anglers targeting a much larger class of fish. It’s ideal for the rock angler, the surf angler in particular.

This is a great option for kayak adventurers who target huge fish. Kayak anglers are nearly assured of submerging their gear more than once.

The VR 175 deals with it like water off a duck’s back.

The VR is also well at home chasing blue water monsters. It’s ideal for a busy boat or a small boat where knocks and impacts are more likely.

The VR175 is a big reel designed for chasing a large class of the toughest of species.

Despite a heavy crank and a jerky drag, it’s an excellent performer under load and stress.

The build quality and the components are first class. As is the design aesthetic. Importantly, it performs every bit as well as the manufacturer’s state.

I’ve always felt that the Van Staal is unlikely to flood the market. My feelings haven’t changed.

The bailess arm is still very niche, and the price will put the brakes on many potential customers.

However, I feel the VR175 is as honest as it gets with its price-point. Indeed, probably much truer to price than any of its competitors.

If there’s any performance reel on the market that has the potential to last a lifetime and then some, it’s the VR175.