The popular Shimano Curado has been with us for over 30 years. Since its debut in 1991. This reel has made its way into the reel arsenal of countless anglers.

It’s popular and has remained popular despite a few iterations failing to live up to previous model performance; the G comes to mind here.

The Curado built its reputation on good old reliability, predictability, and durability – form and function.

In addition to producing workhorses, Shimano is known for their precision–elite brands.

With the Curado K, Shimano has combined workhorse and precision into one baitcaster, while also keeping the price point accessible for even the most discerning angler.

The Shimano K has worked for Shimano and become a winner – as if it wouldn’t. But it is more than Curado loyalty that has propelled it to this point.

First of all, Curado fans will notice a very different style of low profile compared to its predecessors.

Stealth matt black over silver, longer handle (great), and lines give it a totally new look

The old look had dated (naturally). So the K, with its new lines, matt black, and colored accents, has risen to meet modern trends.

I tend to feel the new look reflects a watershed moment for Curado. It’s matured, grown-up, and left the past behind.

Many would argue that this is a bold and critical move for Shimano, as the Curado is a much-loved brand in anybody’s language.

Would such tampering kill a golden goose?

Of course, with a new layout comes a new feel, and the ergonomics of the K represent an improvement.

I tend not to go into ergonomics unless there’s something stupid to point out or something outstanding. There isn’t.

Ergonomics lies deeply in the realms of the subjective. What appeals to some is horrible or annoying to others.

Feel it for yourself. I call it palmable and trouble-free for club-like hands. I don’t mind that it’s a little heavier than its older brothers.

X-ship was a huge addition to the Shimano I. Obviously, it’s been retained, but Shimano has also added a number of other flagship functions that have elevated it to a whole new level.

The Hagane body and CI4+ side plates have added rigidity with the S3D stable spool design and extra bearings delivering further stability.

The drag system was always reliable and predictable, but the addition of cross carbon drag has made for a more confident drag system with increased durability and increased setting adjustability.

However, I will never understand why they have reduced the max drag capacity, down 3 pounds from the Shimano I.

While it’s no deal-breaker, I’m out of ideas as to why Shimano would tax drag power to such a degree.

Despite the new look, the K is in every way a Curado. There’s a workhorse in its DNA.

The Curado remains an everyday super-session reel, with additional durability, strength, and an even smoother feel.

The K is the perfect blend of go-to reel durability, refinement, features, and affordability.

With the K, the Curado has cemented its future. Interestingly, the bar is pretty darn high now. The question is – where to from here.

The Shimano K feature list is a feature unto itself. The great thing about the Curado K is how many features Shimano has incorporated into it. 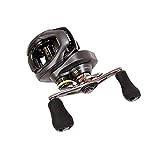 Xship was a welcomed feature on the Shimano I. It’s been retained for the K, and it’s a gem of a design feature.

Importantly, however, the pinon is supported by two bearings.

On the refinement side of things, pinion positioning refines the power transfer.

The workhorse factor is born out in the stability provided by bearing support of the pinion.

The result is a smoother, more powerful, and stable crank.

While bearings help, the smoothness you feel is a result of micromodule gearing.

It is also responsible for reducing vibration, which reduces noise, both aural and feel, allowing you to get more precise feedback from the business end of your rig.

The jury is still out for me on micromodule. Out of the box, it certainly can make a difference.

Over time, however, I’m not sure that it maintains its velvety feel under heavy and frequent use.

In some respects, this is where refinement and workhorse durability are at loggerheads.

I’m more inclined to think the former design was more in keeping with the solid performance Curado fans enjoyed.

Again, this isn’t a deal-breaker for me, but I do know quite a few Shimano boffins who are critical of this inclusion.

Quoting Shimano directly, “SFS was designed to eliminate friction on the spool shaft during cast.”

Instead of calling it Super Free Spool, it should be called “inherent baitcaster design flaw eliminated.”

Anything that reduces friction on the spool is a good thing. Essentially, it puts full spool control in your hands for more precise casting.

Essentially, the potential drag from the pinion gear contact creates a casting variable. Any variable means casting consistency is compromised.

Any reel destined to see sand and water should have shielded stainless bearings.

Yes, it adds to the price, but the cynic inside me thinks manufacturers add on a premium for bearings.

While there’s certainly a difference in bearing quality between manufacturers and models, are they that much better than the bearings in a cheapo KastKing?

Durability is a feature of the Shimano K, but I’d advise you to keep the water out, particularly saltwater. The 6+1 bearing count is higher than the I.

Having bearing support ensures your reel not only feels smoother and more stable but lasts longer owing to the support they provide for shafts and rotating parts.

Hagane, while being more or less a marketing label, indicates aluminum or magnesium construction.

It keeps your reel rigid without packing on the pounds. Rigidity ensures that reel torque and power makes it all the way to the fish.

When twist and flex are eliminated, your gears remain in perfect mesh, and wear is significantly reduced.

Another feature of Hagane is impact resistance. In a small but busy boat, expect your Curado to hit the deck frequently.

Impact resistance is important for a long-lasting reel where hard anglers are fishing hard.

Without going into the technical aspects of the SVS design. The principle is that it delivers consistent spool control and brake force.

What I can tell you is that it works. The function of the technology turns out to be as good as its promise.

The Shimano K casts better than the I. You might argue that it’s only marginally better, but it is better.

Those wanting to cast a much lighter class of lures will be impressed, as it is much easier to cast lighter lures in tricky conditions with SVS tech on board.

This is another feature true to promise. You will notice that you will have a broader range of drag settings allowing for greater refinement.

While not really a big deal, there are plenty of anglers prone to being a little OCD when it comes to drag settings, and therefore CCD will certainly appeal.

The drag is very smooth, but always was, and I’m not sure there’s a significant difference from previous models.

My thoughts are that it will remain smoother for much longer under heavy use and tough battles.

My issue with the drag is the reduction in max drag power. I don’t understand why Shimano stripped 3+ pounds of drag power.

What Shimano has done is to make the spool thinner. This process has reduced vibration and noise and is probably responsible for the smooth feeling the Curado has had since the I.

There are quite a few options if you’re prepared to compromise on price and features. You can also spend a little more and change the playing field entirely.

The PENN Squall Baitcaster, the Daiwa Tatula, and the ABU Garcia Revo SX are good alternatives. 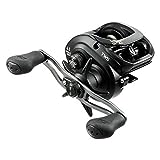 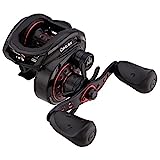 If you’re looking for spool capacity and drag capacity, try the Squall. For quality build, I like the Tatula. For the ultimate smoothness and sleek design, I like the Revo.

Each of these reels delivers a great alternative to the Shimano Curado K.

Each reel offers something slightly different, so it’s worth checking out the details thoroughly to ensure the benefits suit your applications.

How Much Does A Curado Weight?

The Curado has several variants with weights of 7.6 and 7.8 ounces. The faster reels (higher gears) have the extra weight, but it won’t be noticeable.

The Shimano K is heavier than its predecessor, but again, it’s more or less irrelevant. Most anglers are looking for the most powerful reel in the lightest package.

While there’s a lot to be said for keeping the loads light when casting relentlessly, session after session, I feel that 7.6 ounces isn’t a big load to carry, considering its strength and power.

The K is a robust reel for such a palmable unit. I like this reel, and it gives me more confidence chasing larger fish from heavy cover.

Is the Curado K Worth It?

The Shimano Curado K is a great reel, robust, refined, and affordable. So yes, it’s worth it.

What’s more, Shimano isn’t particularly well known for what you might call a fair pricing structure. The Curado is an exception to this.

Is it worth it? Well, that’s completely subjective, but in my opinion, the Curado offers excellent value for money.

Is the Shimano Curado K Good for Saltwater?

The question is not “Is the Shimano Curado K Good for Saltwater?” It’s more, are you good for saltwater?

I’ve never been one to differentiate between supposed saltwater and freshwater fishing reels. Even the most protected reels need care to survive the ravages of saltwater.

The Curado K is great for saltwater so long as you have a regular cleaning and maintenance routine.

With regular post-session cleaning and scheduled maintenance, the Curado will last a long time wherever it’s deployed.

Where is the Shimano Curado K Made?

Originally, the Shimano Curado K was built in Japan. The Shimano K is made in Malaysia,  along with a number of Shimano reels.

These days, and with the bigger brands, the question is less relevant, as quality control is usually pretty strict when reputations such as Shimano’s are at stake.

The Curado comes with a 10-year warranty, which is a strong testament to Shimano’s faith in their manufacturing.