The Pflueger President and the Trion are both very handy reels for budget-conscious weekend fishermen.

Even the more serious angler looking for value in a go-to inshore spinning reel will find something to like.

The problem I have with these models is making a selection between the two. Apart from a couple of differences which I’ll reveal shortly, these reels have little to separate them.

And depending on where you purchase, you’ll pay (roughly) only $10 more for the President.

Keep in mind, you may well pay the same price, depending on where you shop. Specials and promotions and particular distributor pricing can actually wipe out any cost differential.

So how do you make a selection? Let’s take a deep dive into both and see if we can justify one over the other.

Will we find that relatively speaking, one of the models is more or less pointless?

Does 10 dollars make a difference to the average angler in an entry-level reel purchase?

Let’s shed some light on this all too common situation, where nearly identical reel series cost nearly the same price – Pflueger President versus Trion.

Pflueger President vs Trion – What are The Main Differences?

For quick reference, here is a chart of the specs for both reels. I have highlighted the differences in red. Following the chart, we’ll have a more in-depth analysis of the differences.

Having viewed the chart, you can immediately see that there appear to be more differences than similarities, totally undermining what I said in the introduction.

If you look critically, however, you’ll see that the differences, bar two features, are by and largely insignificant. 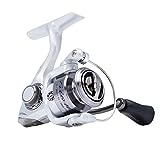 Differences between the President and Trion series

Let’s look at the differences in a little detail, starting with the two biggest differences, being the bearing count and drag system.

When it comes to the lightweight crank there is little difference.

I would argue the average angler couldn’t feel any significant cranking improvement in the President over the Trion.

The difference is most likely to show up under heavy load, as greater bearing support on moving and rotating parts mitigates twist and torque loss.

More bearings also offer less wear on rotating parts, so there can be benefits in terms of wear and tear. More bearing helps your reel last longer.

Both reels have an oiled felt drag system. This is an old traditional drag type, which has been superseded by carbon washers. However, oiled felt drag is still very common in entry-level reels.

This type of system is often smooth and reliable, to a point. Wear and tear, plus water and dirt ingress, as well as compression, tends to degrade this system relatively quickly.

Having an oiled felt drag system sealed from water and dirt is a considerable advantage. Your drag system will operate at peak for longer before maintenance or washer changes are required.

Overall, it’s this feature that makes the President a better value reel. I feel the extra 10 dollars for this feature alone knocks the Trion off the list of considerations.

Weight is an important consideration for many anglers, with the modern angler frequently going for the lightest reel possible.

There is such a small difference between these two reels that it is irrelevant.

I’ve not met any angler who sees this feature as a persuasive or deciding factor in a reel selection.

Most anglers put mono backing on the spool anyway, as it just makes sense. Any rubber components will degrade over time. It’s my preference that reels aren’t “braid ready.”

The President is a great option for the family angler and the weekend inshore angler who likes to chase a mixed bag from a boat or bank.

Operation is smooth and easy, and there’s enough spool and drag capacity to wrestle a feisty striper or drum from the surf (40), a bass from the bank (25), or trout and any sort of panfish from anywhere (20).

The extra bearings and the sealed drag system will appeal to those anglers looking for longevity out of their reel investment.

The extra bearings will offer some battle benefits under heavier loads, and the 10 count makes for a pretty lightweight feel in the crank.

These benefits are most valuable in terms of a long working life. This is because wear is significantly reduced with the bearing support.

Slow oscillation gearing is another benefit, as casting manners are enhanced due to the consistent uniform line lay, and tighter wraps. This reduces friction for longer, more accurate casts.

The sealed oiled felt drag system is a compelling feature at this price point. While oiled felt drag is old-school, having it sealed can offer significant benefits to performance and endurance over time.

The President is an affordable, easy-to-use spinning reel that will appeal to the average angler on a budget.

It’s a great-looking reel, which will provide access to all of your favorite inshore species, salt and fresh.

The Pflueger Trion is an odd reel, relative to its very similarly priced stablemates. Its closest brother, the President will cost you some pocket change for 3 more bearings and a sealed drag system worth every penny.

The fishing applications for the Trion are identical to the President. See above. These reels will do exactly the same thing.

The only difference is that the president will (probably) do it for longer.

The Trion would likely suit the family angler, where there are 5 kids to fit up with their own gear.

In this case, a saving of 10 bucks per reel, turns into a saving of 100 bucks. And 100 bucks, even now, can get you a nice selection of terminal tackle.

The oiled felt drag system will work very nicely, however, caution is required to keep it dry and clean, as water ingress will significantly reduce the life and performance of the system.

The Trion has a light crank, light feel and is, by and large, a pleasure to fish. There are few inshore applications it won’t handle.

It’s a great-looking reel in classic silver with chrome accents and is designed to appeal to the average weekend warrior and family angler, who fishes occasional weekends and holidays.

In many respects, it’s an ideal, value for money choice for fitting out a large family of different ages and skill sets, all wanting to wet a line and catch a feed.

No, the Pflueger Trion is not braid ready, but that should not deter any angler as the braid ready feature is a little bit of a gimmick.

Most anglers use mono backing anyway, but even if you don’t, techniques for tying braid straight to a standard arbor are very easy once you know how.

How Much Line Does a Pflueger President Take?

The Pflueger President can take following amount of line:

Is Pflueger a Good Brand?

Pflueger reels sit under the corporate umbrella of Pure Fishing Inc. Despite them being an American company, the reels are manufactured in China.

Pflueger is targeted mainly at a budget-driven angling market, with the majority of their product firmly based on the entry-level price point, or a touch beyond.

Pflueger is not top-of-the-line fishing gear, however, nor do they pretend to be. Pflueger fishing reels are accessible in price and are a joy to fish for your average angler.

If you take care of your gear, you will also find your Pflueger reel will have a fair bit of stamina, with occasional use.

If you’re chasing 20-pound drum every other weekend from the surf, in the rain, the Pflueger is not really for you.

For a modest outlay, you can pick up a 30 size Pflueger Trion or President and cast cranks at bass all year long, and you’ll get more than your money’s worth, along with a lifetime of memories.

And that’s what it’s all about!