Every reel manufacturer has its flagship series. They are designed to be the ultimate in fishing and compete with the best on the market.

Most of us would like to fish the absolute best there is. Unfortunately, the best tends to come at an aspirational price point that takes our breath away.

Whatever the case, we do love premium kits. Who’d say no to a Stella, Saltiga, or the new Okuma Makaira spin? But why are they so expensive?

Let’s have a look at 5 of the most expensive fishing reels available. I won’t be covering collectibles, such as the $58,000 Holy Grail purchased at auction a decade ago. We’ll be looking at reels available in retail.

Keep in mind that price variation, fluctuation, and supplier do impact price, so when I say “most expensive” it’s a relatively nominal description.

I won’t necessarily look at specific year models either. For example, I’ll suggest the Stella, not the SW or FJ necessarily.

What Are The Most Expensive Fishing-Spinning Reels?

Here is a list of some very expensive high-end fishing reels. 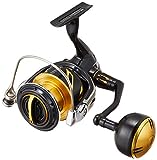 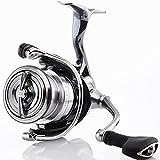 The Most Expensive Fishing Reels in the World

Daiwa’s flagship spinning reel is traditionally the Stella’s closest rival. For those not familiar with the latest 2020 model you should be aware that sizes have changed. 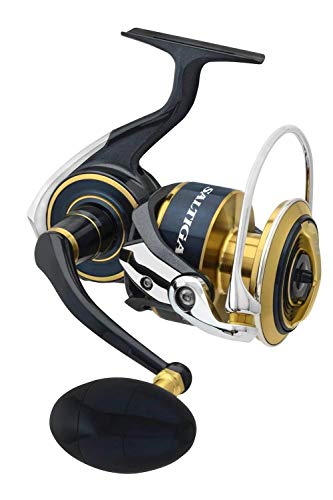 There are 9 reels in the series, with all but the biggest (20,000 H) having two-speed options, H, and P, with H being high speed and P being for heavier cranking.

It will suit those casting big stick baits, setting live and dead baits, or fishing big swimbaits for things like spillway monsters.

The 14000 through to 20000 offer anglers a chance at serious offshore species from wahoo, and Spaniards through to dog tooth and marlin.

The Saltiga series has equal measures of refined precision and brute strength. There are 12 bearings housed in a supremely rigid alloy monocoque body.

The rotor is alloy too, ensuring incredible rigidity as well as keeping the weight down.

Daiwa’s famous Mag-Sealed is present in the bearings, Line Roller, and Body. While not waterproof like a Van Staal, it’s the next best thing.

The Saltiga won’t just take four meters of hammerhead on the beach, it’ll back up and do it again tomorrow, season after season.

I don’t think there is a more famous flagship reel available. If you’re into fishing you know the Stella.

While many Stella fans are lamenting a drop in quality, this has done little to dissuade the general fishing public from its top-dog status.

Unfortunately, there have been some corners cut in recent years, suggesting Shimano is riding on the status of the label and tweaking downwards to increase profits.

That said, the Stella remains a formidable reel, refined and powerful and built to last under the toughest of loads and conditions wherever it is fished.

There are 13 sizes available (SW), starting at the 4000 through to the massive 30000 game-size monster weapon.

The Stella is a phenomenal marriage of a classical dancer and Abrams tank. You can troll it for Marlin, then re-rig and cast massive poppers for yellowfin chasing baitfish on the surface.

If you were chasing GTs from the rock using live baits or the biggest of stick baits, there is arguably no better reel.

With 14 bearings, up to 28kg of drag, and massive spool capacities, there’s no fish, shark, or sea-dwelling behemoth that’s off-limits.

The 30,000 will hold 570 yards of 100 pounds braid, and it’s backed up by Shimano’s flagship drag technologies including Heatsink, Rigid Support, and X-tough.

It’s an astonishing reel series. The 4000 and 5000 are enough to handle massive surf-dwelling drum with the casting manners to get well beyond the breakers.

The 6000 and 8000 are great for lightweight rock action as well as brilliant offshore for the likes of Dorado.

Check out the feature list. If ever there was a reel to aspire to, it’s the famous Stella. Take care of it, and it will outlast you.

The rise of electric reels has been pretty steady over the last decade. While the selection has grown considerably, the niche market means that many of us will not come across them or have an application suitable for such a machine.

The benefits of an electric reel are plentiful for those who bounce the bottom in very deep water.

If you’ve ever hooked into a big bottom-dweller over a few hundred feet down, you’ll be well aware of the effort required to bring it to the boat. It’s exhausting and time-consuming.

Just getting your heavy rig to drop to the desired massive depth takes plenty of time and effort.

The electric reel reduces the effort involved in fishing deep considerably, and of all the electric reels on the market, the Daiwa MP 3000 is by far the most expensive.

At 196 ounces, this is one heck of a heavy reel, even though it’s built from machined aluminum.

The Mag sealed 16 bearing system has a huge stainless main gear, and a stainless line guide with all electronics completely sealed from the elements.

With a ratio of 1.7:1, this is definitely a reel designed for cranking the heaviest of fish over long distances.

This type of reel isn’t for everyone, and the price will hold back plenty more.

However, if you’re cashed up and hitting the deep stuff for some of the ocean’s most delicious fish, why not do it with the best…well, most expensive. 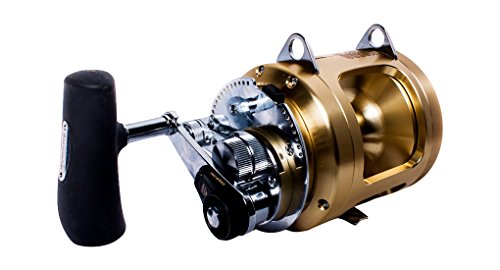 While it still packs a hefty price, it sits behind the very expensive Shimano Tiagra 130A, which doesn’t leave much change for game lures from 1500 dollars.

The Tiagra isn’t just designed for game fishing, it’s designed for breaking records. When you’re chasing 1000 plus pounds of Marlin, this is the reel you strap yourself to.

This is the sort of expensive reel you deploy from the largest of game boats equipped with a game fish fighting chair.

Capacities are enormous as you might expect. The spool holds 914 meters of 59kg mono and 3040yds of 150-pound braid.

There’s 45 kilograms of the best Twin Disk Drag System in the business – enough to arrest the biggest of ocean dwellers.

The dual-speed system offers heavy cranking 1.15:1 for when the going is super tough, and a high speed 2.2:1 for when you have a chance to get some line back.

At just short of 5kg, this is a heavy reel. It’s not the sort of reel you’ll stand and fish – this is sit down, strap in and hang on.

You’re bolting this reel to a game rod rated to at least 65kg, and you’re trolling the edge of the shelf for genuine monsters.

This is a serious reel, for the most serious of game anglers.

This sort of fishing is a team sport, the stakes are high, the costs are higher, and the Tiagra 130A is the sort of engineering brilliance you require to wrestle the ocean’s most powerful fish hundreds of miles offshore.

I could have put any number of more expensive reels on this list. However, this is the most expensive fishing reel and it’s one of the most impressive reels you can buy. 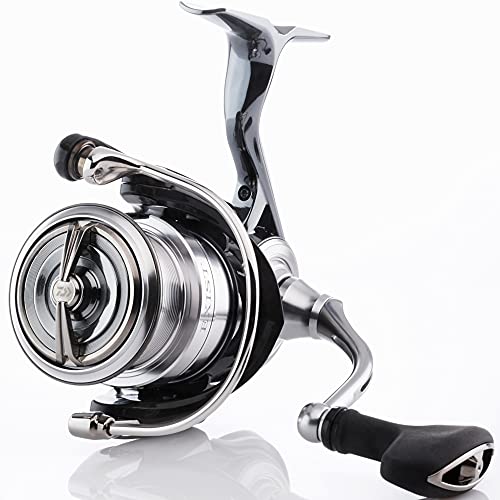 The Exist is an inshore reel, yet has some surf, and nearshore applications due to its incredible performance.

This is an aspirational reel that an inshore angler would cherish for a lifetime, and it’s built to last for a lifetime of go-to fishing.

The monocoque body is a revelation from Daiwa, allowing greater room for a much bigger main gear.

It’s not that the drag capacities and spool capacities are particularly huge. By modern standards, they’re quite modest, or standard.

However, the precision machining, sealing, balance, feel, and torque are astonishing. It’s butter in your hands, but ergonomically brilliant, with a crank that’s light as a feather.

Under load, it doesn’t budget and holds its form beautifully. Each size will punch well above its compact size, as the powerful internals, rigid body, and rotor give nothing back to the fish.

If I was asked to select any reel as my inshore go-to, and I didn’t have to pay for it, the Exist would be at the top of my list.

While Daiwa, Shimano, and others make reels of similar pedigree and performance for significantly less, the Exist doesn’t hide its superiority – you really can feel the difference.

With its sealing and protection, I’d like the 4000 to fish the surf, even though spool capacities are a little light on in a traditional surf sense.

The Exist is full of Daiwa’s flagship tech and is an absolute joy to fish. If you have a grand in your pocket set aside for fishing gear, why not lash out on an Exist. Treat it with care and you’ll have it forever.

What is the Most Expensive Reel That You Can Buy?

The most expensive fishing reel you can buy is the Daiwa Marine Power MP 3000 12v which retails for $3500 depending on the supplier and the time you purchase.

What is the Best Fishing Reel in the World?

In all honesty, there is no relevant metric that can help anybody make such a call.

Firstly you have to compare apples with apples, which means you would have to categorize.

In my opinion, and not to sound trite, the best fishing reel in the world is the one that allows you to catch the fish you target.

It’s probably better to say that very cheap reels have the potential to hinder your ability to catch fish.

More expensive reels are definitely of benefit at the extreme ends of each fishing application.

For example, the cheapest of cheap game reels will struggle against the toughest and biggest of game fish, whereas a brilliantly designed and engineered game reel, full of top-shelf components will stand up far better in the toughest battles.

Why Are Stella Reels so Expensive

I’m not sure I can answer that question effectively. Indeed, unless you worked at a high-level position in Shimano, I feel it would be a difficult question to answer.

While it has top-shelf tech, components, design, and raw materials, it’s not without fault. I feel the reason a Stella is SO expensive is owing to its reputation…you’re paying a premium for the badge.