Pflueger President XT vs President – What Are The Main Differences? Reviewed

The Pflueger President and its slightly more athletic brother the President XT, sit in a hotly contested price point of the entry-level spinning reel segment.

If you check online, you’ll find plenty of questions about these two models, which suggests a lot of popularity, or at least a lot of interest.

Let’s have a look at the two reels. Both are worthy of your fishing dollar and deliver a solid fishing experience.

But which one is right for you?

Essentially, the XT is a variant of the standard President. But does it offer enough features to make it stand above its little brother, warranting the extra cash outlay?

Depending on where you purchase, the Pflueger President XT can be approximately 20 to $25 more than the standard President.

While it doesn’t sound like much, anglers purchasing in this price segment are putting serious consideration into every dollar they spend.

So what separates the two?

And does your particular fishing application demand the few extra bells and whistles available in the XT? Let’s look at the features and specs of both.

What Are The Main Differences Between The Pflueger President and President XT?

A survey of the metrics above shows that there is very little difference between the two. Is the average angler going to notice 1 ounce of weight difference? I suggest not.

Are there durability trade-offs between the two? If anything, the cheaper reel with the stainless internals offers greater durability.

With the XT, you’re possibly trading durability for an ounce less weight.

That leaves the gear ratio/line pick-up speed, which is faster with the XT. By and large, the only real functional difference between the two reels is speed.

And to be honest, it’s not a huge difference. Unfortunately, such minor differences make me very cynical.

This is a marketing tactic, frequently employed by larger corporate-owned fishing brands, which doesn’t benefit anglers with genuine selection variety.

Using the 4000 size to illustrate the difference between the President and the XT the only applied and functional difference is a touch over 6 inches of line retrieve.

This is disappointing, but all too common with many manufacturers, particularly those emanating from the Pure Fishing stables.

If you fish metal slice lures, there’s definitely an argument for the faster reel.

For the rest of us, I’d take a punt on the President, with the chance that the stainless internals will endure longer than the alloy. 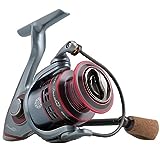 Comparing reels at this price point is fraught. There are so many from which to choose it’s impossible to consider them all.

Further to this, with a little extra cash, you open up a whole new level of options.

Because of this, I’ll look at the merits of the President series and judge it on its own merits without considering its competitors.

This is tough because the only way we can assess value for money is through relativities. I.E., Is there a better reel for the same money or less?

That’s a rabbit hole I’ll never be able to escape from in an article of this size. So in order to rate it, I’ll review it in isolation, therefore speculating its relative value.

Let’s get into it.

The Pflueger President is a worthy reel. It’s fun to use, smooth, tight, and predictable.

The size range covers the lion’s share of inshore applications and would make a nice surf and rock reel (40) for chasing modest size stripers, drum, and bluefish.

Your imagination is the only limit with sizes 20 to 35, giving you access to trout in the mountain lakes, and solid flounder in the saltwater estuaries.

Depending on the rod to which you strap it, the President will perform nicely with lures or natural baits.

Spool it with braid or mono, both are great, you’ll lose a bit of capacity with mono, but that’s the case with every reel.

There are no particular features that stand out as particularly compelling over any other. The drag system is fully sealed, which is a notable feature in an oiled felt drag system.

Ironically, if they had selected carbon drag washers, there’d be less of a need for drag sealing. At this price point, I think it’s past time manufacturers gave up on oiled felt.

While the better examples are smooth and dependable, they don’t have the endurance of carbon drag systems.

If I were to choose any feature as salient, it would have to be the bearing count. The crank feels very light, thanks to the rotational support of 7 or 9 bearings.

The benefits of bearings, however, crossover from feel to durability.

The more moving parts that are supported by bearings, the longer your reel will last. Furthermore, bearings add to overall rigidity, keeping moving parts in place while under load.

The President is light enough, which makes me question the need to replace the stainless pinion and shaft with alloy in the XT.

For an ounce of weight savings, I think the XT may have lost some ruggedness and durability.

Alloy can be strong when machined into a shaft or pinion, but it must be quality. I guess time will tell us if the alloy internals were a good idea or not.

The Pflueger President might not be the leader that’s implicit in its name. However, it delivers great inshore access and a really cool fishing experience.

I can’t attest to durability, but I assume that if it’s well maintained, it will enjoy a lengthy spell as a go-to in your spinning reel arsenal.

For the Pflueger President XT review, see the President’s review above. By and large, they are the same reel apart from a few minor differences.

If you’re super-human and you can feel the difference that 1 ounce makes while you’re fishing, then the XT might be for you.

Just remember, the XT has an alloy main shaft and pinion, and while lighter, you might be sacrificing some durability and longevity.

As discussed earlier, the XT is faster than the President. Those who fish applications where speed is important might opt for the extra pick-up available with the higher ratios.

The applications for the President and the XT are pretty well identical.

However, the extra speed of the XT will make it more suitable for retrieving fast stick baits and speed-loving metal slices.

Ultimately, selecting a President vs the XT will come down to the value of 25 to 30 extra dollars in your pocket.

What Is The Smallest Pflueger President?

The President and the XT have the same size range. The smallest in the series is the 20 (2000).

How Much Does A Pflueger President Reel Weigh?

A Pflueger President has different weights depending on the option you choose.

The equivalent in XT is roughly a half-ounce to an ounce and a half lighter.

How Big Is The Pflueger President?

The biggest Pfluger President is the 40 size. Most anglers will recognize that 40 is the equivalent of 4000.

Based on this, the President series would be considered an inshore reel useful for inshore land-based applications as well as afloat.

The 40 is versatile enough to be a useful surf and light rock fishing reel.

The President is a reel series that most recreational anglers will enjoy using. For many, it will work nicely as a go-to first-choice reel.

It has a strong, smooth predictable drag with plenty of strength and a lightweight crank.

There is enough strength and potential durability to justify its price tag, and enough of a size selection to cover a wide range of applications.

If I had to choose between the two, I’d probably go for the President in protest at Pure Fishing’s lack of differentiation and value in the more expensive XT.

If you liked this Pflueger President XT vs President review, please share with a fellow angler.