There’s a bit of an art to keeping conventional reels affordable without compromising performance and durability.

However, in my opinion, providing solid fundamentals at an affordable price point is an excellent measure of manufacturing integrity and customer focus.

The Warfare has some advantages and disadvantages, which we will look at later in this review.

I will also cover the features and benefits of these reels and see how this can affect fishing performance.

It takes fishing smarts and experience to deliver a reliable conventional workhorse we all can afford.

Key Features of the Warfare Star Drag and Level Wind

The Star Drag and Level Wind

It seems Penn assumed the level wind to have the greater popularity as it is available with 12 options (technically speaking), where the star drag only has two.

The star drag has a size 20 and a size 30. The size 20 has a narrow spool design. The 20 is the most compact of the Warfare star drag models.

This is how the level wind reaches the count of 12 options.

The level wind and its options are, more or less, the only variations between the two models.

The larger LW’s have a much lower gear ratio, but that is to be expected, and more on that later.

They’re both built on a graphite frame and sideplate. They have 3 bearings, an anti-reverse bearing, an aluminum spool, and an HT100 drag system.

The main and pinion gear are machined brass. It’s a modest build, yet it delivers an excellent backbone.

Penn Warfare Features At a Glance

While there’s nothing to excite the tech-heads among us, that’s not what Penn warfare reels are all about. We’ll look at both the Star Drag and the Level Wind in this section.

I’m a level wind fan. Good line management is all about a uniform and consistent line lay. A good level wind system ensure you achieve this. 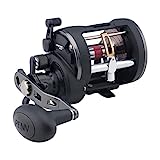 Casting with a level wind is an interesting trade-off. On the one hand, a uniformly packed spool casts better.

On the other, friction from the level wind system can reduce casting distance or even damage line.

Manual line lay onto a spool can become tiresome. For the beginner, it’s a super challenge. Intervention is often required to redistribute line retrieved under load or in a hurry.

The benefits of not having a level wind are reductions in casting friction, fight friction, and overall reel weight.

Casting distance is often reduced with a level wind, and friction can damage line during a heavy fight.

There is also one less moving part that is subject to wear, corrosion, and damage.

Technically speaking, a reel without a level wind is in some ways more robust and reliable. Level winds do corrode, fill with dirt, and grime, and require frequent, if cursory, maintenance.

I’ll take a decent level wind any day for its convenience and a well-stacked spool.

Attitudes vary about the level wind on a reel of this type. If casting was my focus, I’d be using spin anyway.

Graphite Frame and Side Plate

For me, this is the one downside of the reel. It’s not a criticism, however.

This is how Penn keeps the price accessible. Twist and flex is always a possible problem when graphite body parts are under severe load.

While that’s not great, graphite does have the benefits of keeping the weight of the reel down and the corrosion away.

We’re getting used to seeing reels with factory loads of bearings. However, this is absent in the Warfare for obvious reasons.

Generally speaking, a big bearing count sends the price up very quickly and steeply. The Warfare delivers a pretty smooth crank regardless of its modest bearing count of 2 +1.

The small number of bearings is more a tax on durability than the smoothness of the crank.

The line counter provides a reading of how much line you have out. This can be useful for trollers and jiggers.

For me, it’s a bit of a gimmick and feels like it’s in the way. I’d rather a couple of extra bearings over the line counter.

The warfare has a robust and lightweight spool with reasonable capacities across the size range.

Over time I’ve become a fan of the HT100 system. While the washers will require replacement after heavy sustained use, it’s an exceptionally smooth system relative to some competitors.

My only criticism about the Warfare are drag capacities seem a little light-on. It’s surprising for what is a pretty heft reel.

A standard for Penn, and a pretty good standard at that. This is solid gear.

Wear on these components will probably boil down to twist and flex from the graphite body.

The crank is smooth and powerful, with ratios designed for power over speed. 5.1 is the dominant ratio with the larger LW models at 3.9.

Which Anglers Will Get The Best Use From Penn Warfare Reel Series?

While Penn marketing suggests versatility, I would disagree. The warfare is ideal for trolling and setting live baits. It’s more a boat reel than a land-based reel.

While it can cast, allowing for some rock, pier, and surf applications, other reels at similar price points do it better.

It’s not really a reel for casting. There is no braking system, so any casting will require a deft touch.

It will also work quite well as a jigging reel. However, the weight might put a few anglers off, as jigging is hard work with the lightest of kit.

Penn Warfare vs the Squall – Which is The Best?

For an extra 50 to 60 bucks, depending on the model, you have access to the Penn Squall II.

In my opinion, the extra cash is worth it if only for the spool upgrade.

The live spindle with free-floating spool delivers some pretty classy casting manners, which provides more versatility than the Warfare.

The Squall II a genuine rock and surf reel, and a reel for casting big lures.

The magnetic braking system is pretty easy to manage and allows for some pretty aggressive casting.

You also get a drag system and capacity upgrade giving you more fighting power and durability credentials. Spool capacities are also more capacious.

The crank is much smoother in the Squall as there is double the bearing count. A jump in ratio speed to 6.1 is excellent for hook setting as you can take up slack quickly.

It’s also great for anglers looking to rip lures fast. The Penn Squall is also lighter. This will impress the jiggers and the surf anglers.

With five sizes from which to choose, the Squall II series offers plenty of versatility and options for the money.

To be honest, I would spend the extra cash and get the Squall II over the Warfare. Unless I was looking for a trolling reel specifically and was on a very tight budget.

Verdict: Is the Penn Warfare Any Good?

The answer to that question has to be yes. While it is limited in versatility and features, the Penn Warfare series still provides credible access to a quality fishing experience.

It will also last countless sessions with reasonable maintenance. The Warfare is value for money fishing for the budget-conscious angler.

What I find difficult to reconcile is that the Squall II is a far superior fishing reel for not much more.

Percentage-wise, yes, it’s 50% plus more. However, at this entry-level price point, that doesn’t equate to much more of an outlay.

I’ve given up trying to guess manufacturer motivation behind reels, particularly when comparing the features and quality of stablemates nesting closely on price point.

The Warfare is a very cool option for budget-driven trolling and live baiting from your boat. It’s great if you’re the type of angler that has a specific reel for all occasions.

For my money, however, I think if I were short on the few extra bucks to purchase the Squall II, I’d wait a couple of weeks, save the coin, and buy the far more versatile Squall over the Warfare.

The Squall II can do all that the warfare does, but the Warfare can’t do half the tricks of the Squall II.